What is variable valve timing?

In short, VVT controls the timing of the intake and exhaust valves opening and closing. Valve timing impacts performance, emissions, and fuel economy. The advanced (early) or retarded (late) opening of the valves controls the impact on driving.

VVT systems allow valve timing to be optimized for all driving conditions and eliminate the need to sacrifice performance for fuel economy and vice versa. Auto manufacturers have different names for their VVT systems like Honda’s V-Tec, Nissan’s VVEL, and in the case of BMW, VANOS.

How does the VANOS system work?

Nearly every auto manufacturer has engineered a variant of variable valve timing. VANOS uses oil pressure to adjust the cam phase, controlling the advance and retard of the valves. Cam phasing rotates the camshaft left or right to change when valves open and close.

Early VANOS equipped BMW’s only incorporated VVT on the intake camshaft. This system is referred to as Single VANOS. Starting in 1996, models included a unit on the exhaust side as well, known as Double VANOS. 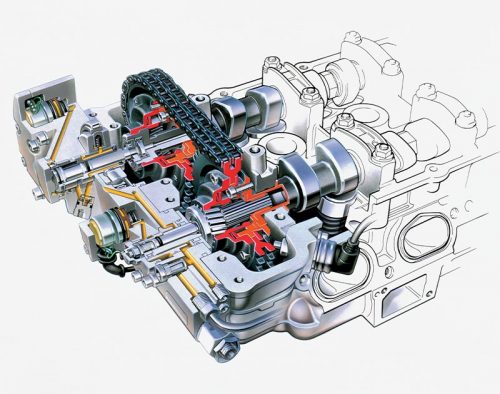 VANOS is controlled by oil

Your vehicle’s ECU (engine control unit) controls a solenoid that routes oil through passages within the VANOS unit. The ECU takes a variety of factors into account when controlling the solenoid, like throttle position, oil pressure, load, mass air flow readings, engine speed, and gear.

The oil routed by the VANOS solenoid controls the inward and outward movement of a piston and helical gear, which inserts itself between the cam gear and camshaft. The helical gear has inclined teeth that change the phase of the camshaft depending on how far inserted or extracted it is. The degree of change optimizes valve timing depending on driving conditions, determined by the ECU.

While the VANOS system is not overly complicated, any component with seals and moving parts can wear out over time. VANOS has a direct impact on engine performance so any issues that arise will typically cause poor drivability. As your car ages, the VANOS system will start to fail. Owners of higher mileage cars should be on the lookout for symptoms that can indicate issues with VANOS.

If your BMW is having any of the following issues, a VANOS issue may be to blame:

– Misfires and a rough idle

– Hesitation when accelerating from a stop

Because the VANOS system optimizes valve timing, certain symptoms like power loss will be most noticeable at specific engine RPM’s. The general lack of optimized valve timing from a VANOS issue will contribute to issues like misfiring, rough idle, and poor fuel economy.

Let the technicians at Motor Werke fix your VANOS issue!

Whether you have leaking seals or a failing VANOS solenoid, it’s important to get it fixed. VANOS issues prevent your car from running as it should.

It’s essential to have the VANOS system repaired with genuine parts and the work done by BMW experts to prevent further issues down the road. At Motor Werke, we serve BMW owners in the Kelowna area and Okanagan Valley. If you suspect your car is having VANOS issues, give us a call today!