Despite exceptional engineering and craftsmanship, BMW’s run into issues like any other car. Many BMW engines succumb to oil leaks, which come with expensive and lengthy repairs. Many of these leaks would have been covered under a factory warranty but can often reoccur after the warranty period due to a lack of engine maintenance.

Furthermore, plastic coverings underneath modern BMWs can catch leaking oil, making them even harder to detect without getting the car on a lift. Some owners can end up driving for thousands of kilometers without realizing there’s a leak.

At Motor Werke, we have experience tackling these oil leaks, but as a BMW owner knowing the problem areas can help you when purchasing a used car or bringing your daily driver in for service. In this article, we are going to cover the most frequent oil leaks that plague BMW engines, and the vehicle models most likely to be impacted. 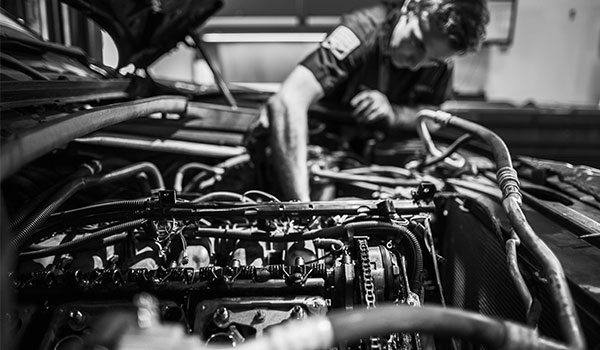 Why does my BMW leak oil?

This answer can apply to any car. Various components are mated to complete the engine in your car. These mating surfaces utilize gaskets to prevent leaking. Gaskets are typically made out of rubber, silicone, metal, neoprene. Or a combination of materials.

Through the countless heat cycles and brutal conditions, your engine is exposed to over the years you own it, the materials in these gaskets begin to wear down. A lack of maintenance (oil services) can also speed up the process of these gaskets wearing out. As the oil begins to break down and other chemicals such as hydro carbons (fuel) also contaminate the oil, they cause these gaskets to become hard and brittle to the point where they can no longer seal and leaks begin.

What are the most common oil leaks on BMWs?

It varies by year and engine, but there are a few common oil leaks that many drivers will experience while owning a BMW. Some of these leaks are minor and won’t cause serious issues right away, but others need to be addressed immediately to prevent engine failure. Remember, if you know or suspect you have an oil leak, keep an eye on your engine oil level

A leaking oil filter housing gasket left unaddressed can spell disaster, particularly on vehicles with the oil filter housing attached to the cylinder head. The position of the oil filter housing means leaking oil comes into contact with the serpentine belt and coolant hoses, causing premature breakdown. This becomes an issue when the serpentine belt breaks down enough to slip off the crank pulley, gets shredded, and is forced into the engine through the front crank seal. With bits of the belt in the bottom end of the engine, severe damage from debris or oil starvation is nearly inevitable.

Valve covers are on the top of the engine, bolted to the cylinder head. The valve cover sits over the valve train, including the camshafts, valves, and valve springs. Leaking valve covers can plague nearly all BMW engines. If left untreaded it can become dangerous due to oil leaking down the passenger side of the engine block and burning off the exhaust. A smell of burning oil and smoke from the engine bay will become present and getting it in for repairs as soon as possible is important.

BMW V8 engines from the M62 up to the current N63 suffer can leak oil from the upper timing covers. This condition is more common on naturally aspirated V8s than the modern twin-turbo motors. BMW V8s are typically found in 5 Series, 6 Series, and 7 Series cars as well as X5s, X6s, and M Performance models.

This leak affects modern twin-turbo V8 BMWs. Oil flows through the turbochargers sitting between the banks of cylinders, lubricating the bearings inside. The oil drains from the turbos back into the engine block through return lines coming off each turbo. The return lines come together at the oil return block before entering the engine. The seal where the oil return block meets the engine block is where oil leaks normally occur. The Turbos require removal to rectify this leak, resulting in a very labor-intensive repair.

Another common oil leak on twin-turbo V8 BMW engines. The upper oil pan gasket tends to leak oil. Due to the location of this gasket, the labor involved in correcting this leak is extensive, in some cases a 15-16-hour repair.

The alternator bracket seal is a notoriously faulty component in early to mid-2000s V8 BMWs. This issue primarily impacted X5s, 5 Series, and 7 Series cars from around 2004 to 2008, but there were others.

The design of the alternator mounting bracket and accompanying gasket was very poor, particularly for BMW. Older vehicles are even more prone to this failure. While the gasket itself is extremely inexpensive, the labor required to replace it is extensive.

Leaking oil can also cause damage to coolant hoses, which will need to be replaced.

Even if a leaking oil filter housing is caught on your BMW before the serpentine belt fails, it is essential to inspect the belt when the leak is fixed. Oil may have already weakened the belt, which could lead to a failure even if the leak was corrected.

Get Your BMW Serviced at Motor Werke

Oil leaks are a reality of owning a BMW. Make proficient hands perform the repairs needed to stop the leaks. At Motor Werke, our technicians bring attention to detail and expertise you won’t find anywhere else. If you suspect your BMW is leaking oil, don’t hesitate to give us a call or schedule an appointment online!