Wheels are hands-down the most effective visual modification you can do to your car, and can carry some enticing performance benefits as well. If you’ve ever attempted the intimidating task of selecting and speccing your own set of wheels, you already know that the wheel industry is a lawless wasteland of numbers, sizes, fancy words and technologies that don’t even begin to explain what you’re even paying all this money for.

Is it all just clever marketing, or is there actually some meat to go with these shiny, cylindrical potatoes? 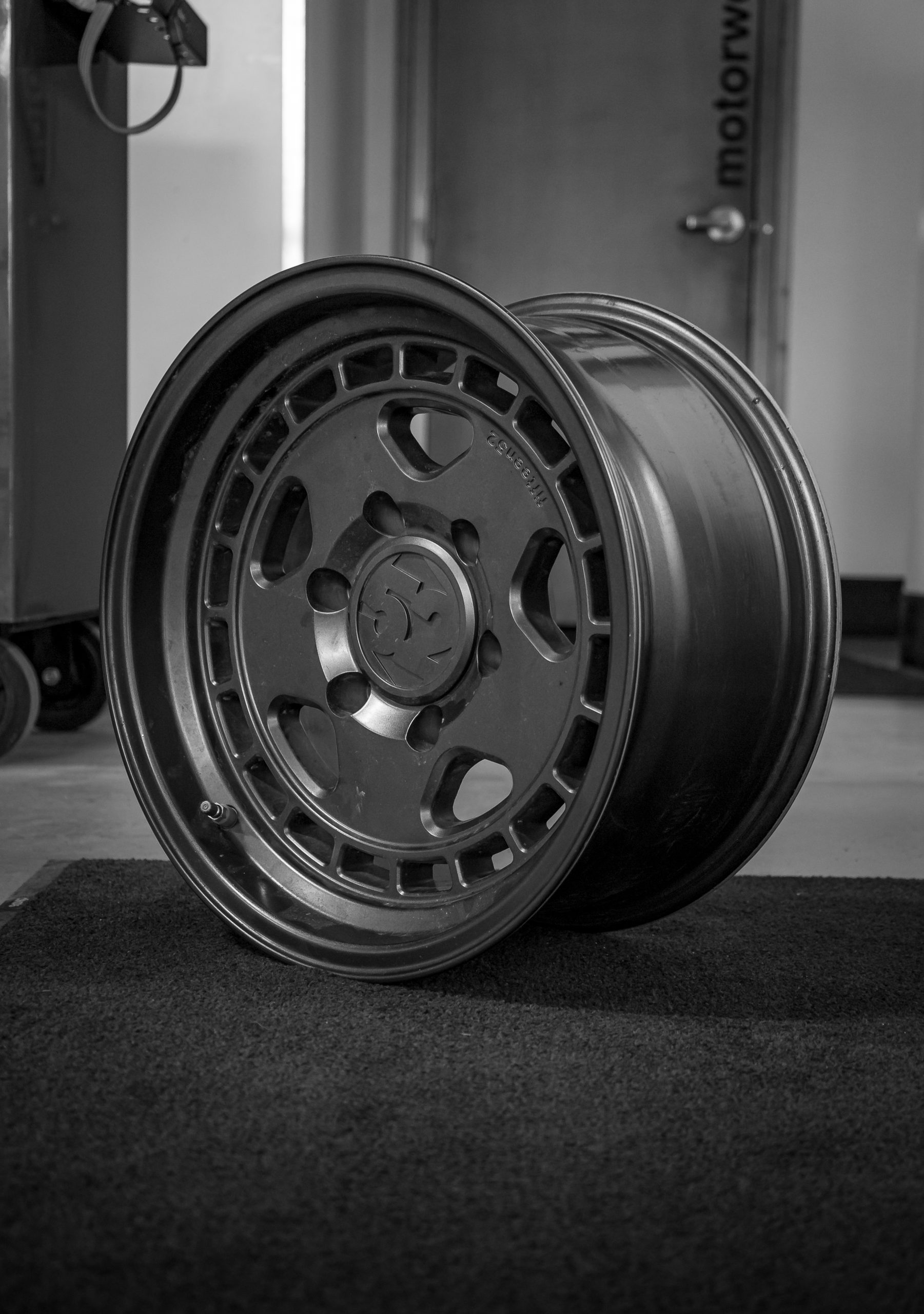 More commonly known as Aluminium, or Alloy wheels, 99% of the aftermarket and OEM wheels out there are cast. Think of them like the vanilla ice cream of wheels. Casting is by far the fastest and cheapest manufacturing process, and while it isn’t the strongest, the end product is more than capable of handling what the everyday user will put it through.

When comparing a BMW 328i with a Lamborghini Huracan, obviously the latter is the “better” car, but that does not necessarily mean it’s the best car for you. The same principle can be applied to wheels.

Without going into too much detail, cast wheels are made by pouring a molten aluminium/nickel alloy into a mould and leaving it to cool. After it is hardened, the wheel goes through various heat and chemical treatments to increase its strength and corrosion resistance.

The wheel castings are rough around the edges, so they go through a CNC machine to clean up the lips and faces, and make sure the mounting face and bead surface is perfectly smooth.

The downside to the casting process is that it does not lead to the strongest end product. It is strong enough for what they do, but they could be stronger. At a microscopic level, the individual grains of metal are all over the place, which is fair enough, seeing as only moments before becoming a wheel, they were just a bucket of spicy red play-dough. This problem is where forged wheels set themselves apart, which we will get into in a moment.

When it comes to potholes and other road hazards, cast wheels can be prone to deformation, which can cause the wheel/tire assembly to leak or become unbalanced. In some cases a cast wheel can be repaired and made true again, but that can often cost more than simply replacing the wheel. 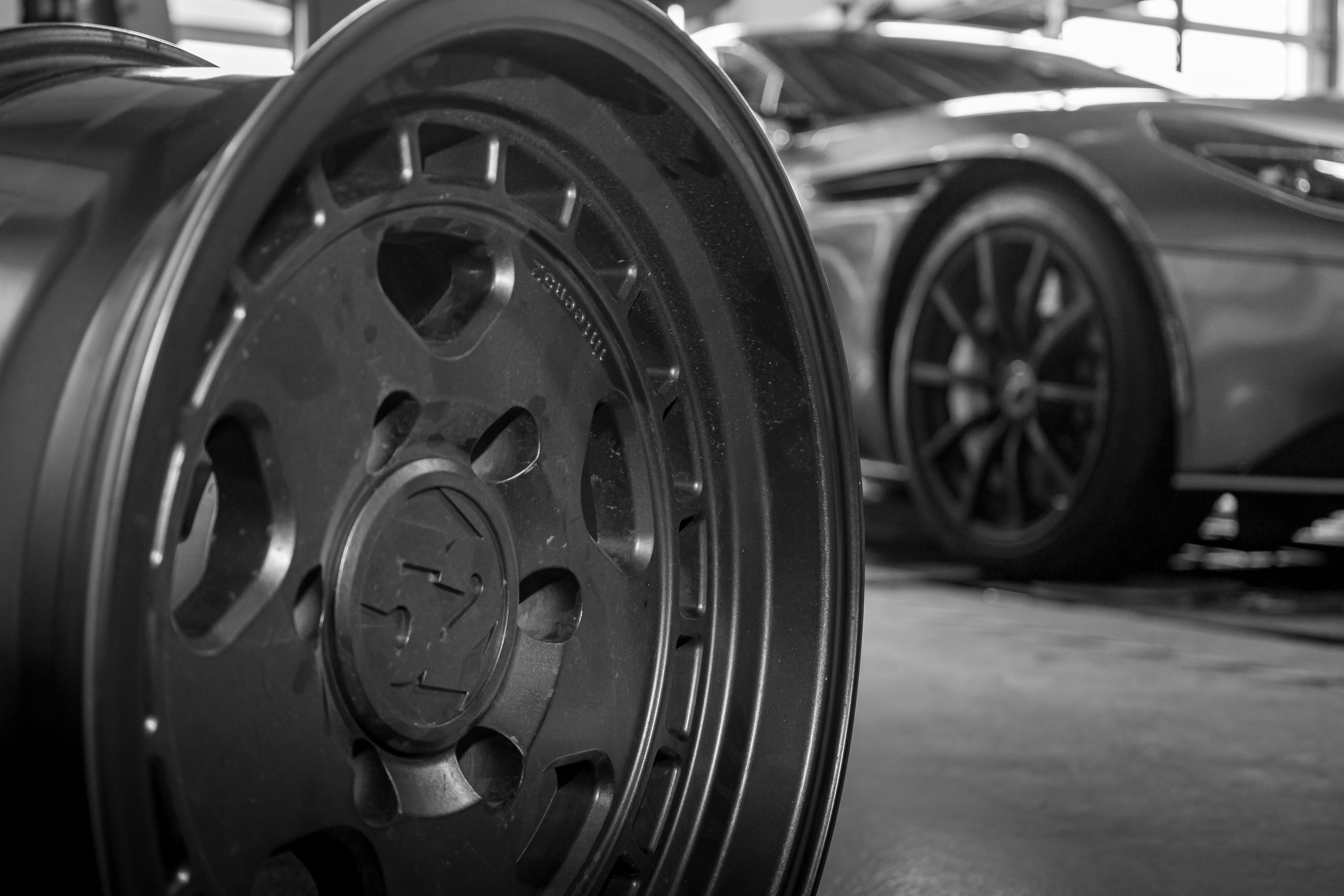 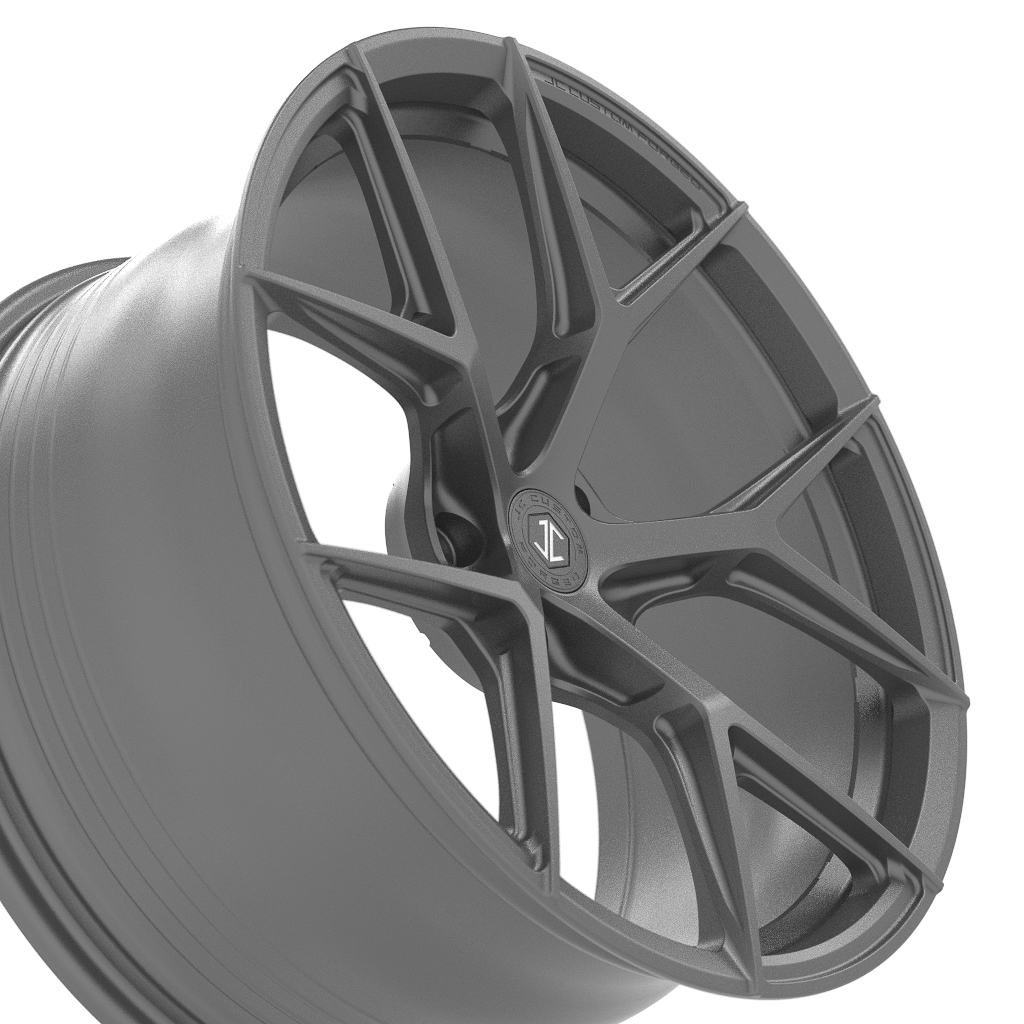 Most commonly referred to as Flow Forming, this process combines the benefits of both casting and forging, so manufacturers can provide strong, lightweight, wheels at a reasonable cost.

The wheel begins its life as a cast blank. The face/spokes and outer portion of the barrel are already complete from the casting process, and end with a thick ring of material that will become the barrel.

The blank is placed in a machine that heats and slowly rotates the wheel, while using a roller to slowly pull the material down a die to achieve the desired width.

This heating and pulling process aligns the microscopic grains of the metal, greatly increasing its strength. When the material itself is stronger, you don’t need to have as much of it. As a result these wheels can be as much as 40% lighter than their oem counterparts, leading to huge unsprung weight savings.

Unsprung weight refers to the parts of the car between the suspension and the road. Brakes, wheels and tires, hubs, knuckles, etc.

Weight reduction in these areas will greatly improve your vehicle’s handling characteristics, and wheels are the simplest and most cost-effective way to achieve that weight reduction.

As if this hasn’t been confusing enough, this is where things start to get interesting. Forged wheels can refer to several different methods, but we’re just going to cover the two most common.

Machine Forged wheels are essentially the jewellery of the car world. These wheels are often found on high end luxury and exotics, as well as more “regular” performance cars like a BMW M3 or Audi RS5.  The wheels are more expensive than cast or flow formed, but the fit and finish is second to none.

These wheels can be manufactured with fully bespoke designs and sizes, so the only limit is your fender arches. 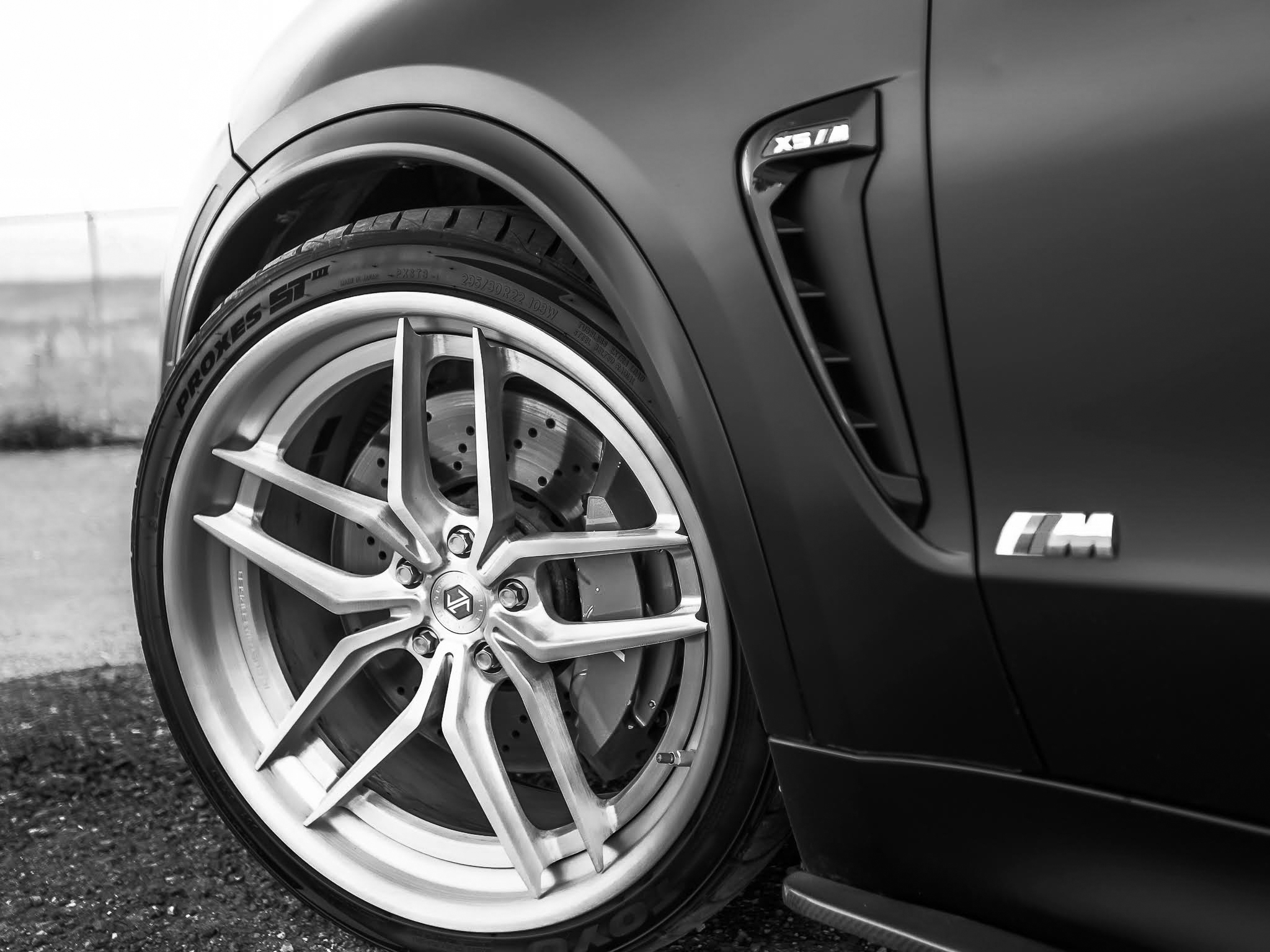 These wheels are machined out of a blank that has been stamped only roughly into the shape of a wheel.

The stamping force used to shape the blanks aligns the metal grains with each other, but the grain structure is not changed beyond this point, so it does not flow with the shape of the wheel. This is still a very strong wheel, stronger than casting, but not nearly as strong as it could be.

Unlike Flow Formed wheels, the blank does not have the spokes already defined. The blank is just solid aerospace-grade aluminium across the face, and the barrel is already at its final width. From here, material will be removed to create the wheel.

To go from blank to wheel, the blank is loaded into a lathe, which removes material from the inner and outer barrel to round it perfectly, and get the bulk of the blank’s extra material removed. Then it’s off to a CNC (Computer Numerically Controlled) machine to take it the rest of the way. 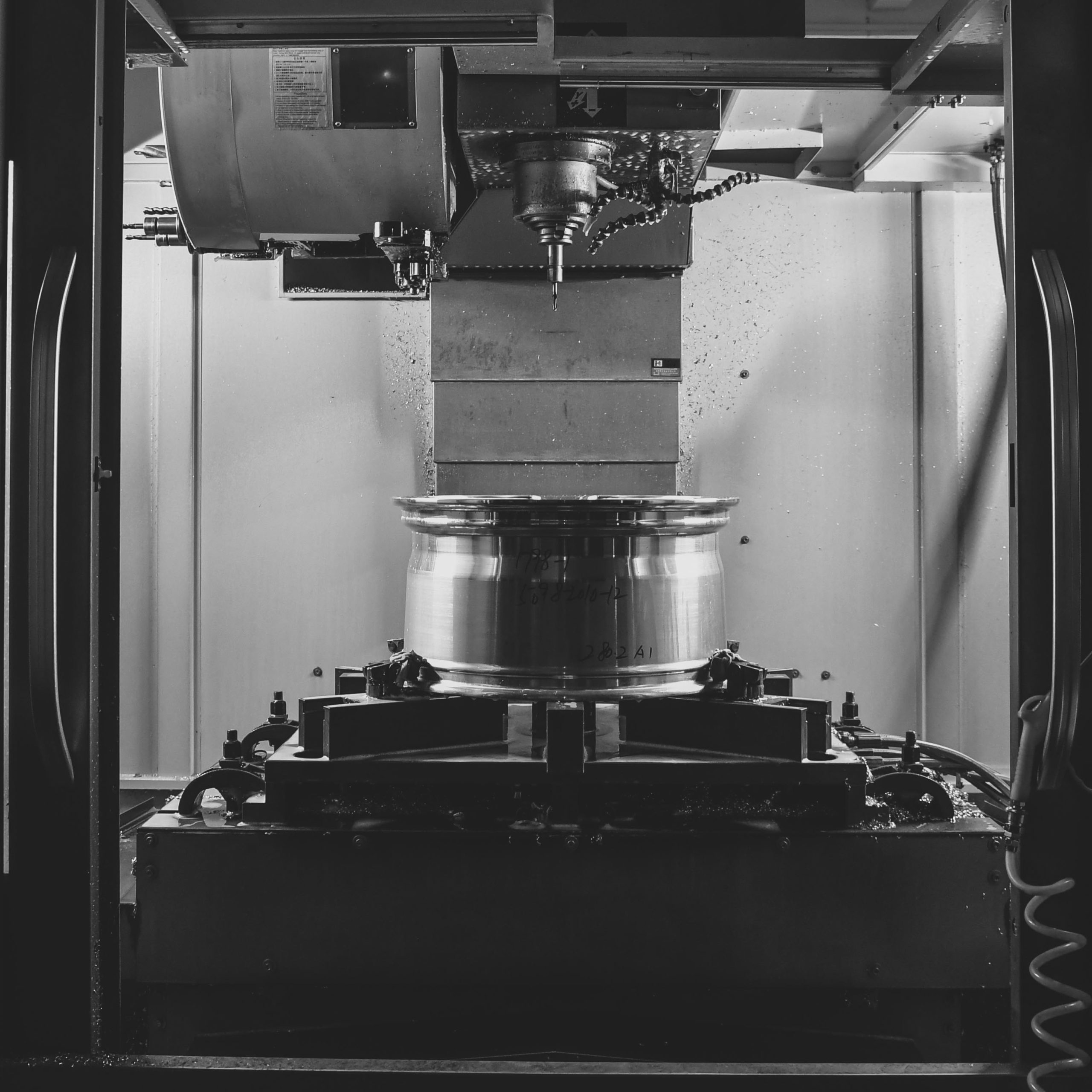 and details. This is called subtractive manufacturing, the principle is similar to how totem poles are carved from a single log. This process is much more time consuming, and expensive than casting, but you can create much more intricate designs that would be impossible with casting. After machining, the wheels have the final finish applied by hand.

The end result is some of the most beautiful wheels out there. They are not to everyone’s taste, but there is no denying the incredible technology and talent that goes into the design and manufacturing of these pieces.

The final process we are going to look at is called Flow Forging. The idea is similar to that of Flow Forming we talked about earlier, but there is no casting involved. The blanks for these wheels are pressed from blank to final shape in a single step with a 10,000 lb press. After stamping, the wheels have the final touches added, and edges/mating surfaces cleaned up in a CNC machine.

This process pulls the grains of material into alignment with each other as well as with the shape of the wheel as it is shaped. This creates the strongest possible material, but again, the design is limited by what can be done in moulds. 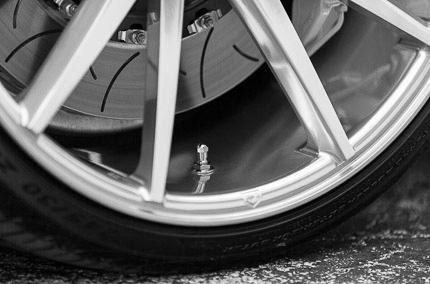 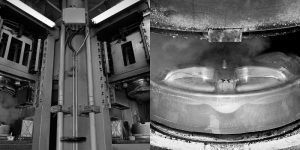 These methods cover most of the wheels out there, but the rabbit hole goes deeper still. There is a lot to take in, understand, and compare, which can be very intimidating. Our team has the knowledge and resources to navigate the minefield of wheels and guide you to the type, style, and size to fit both your car and your budget.